Hello, hello! I'm back with more behind-the-scenes brainstorming of my latest short story, "Revolve Her," inspired by the lyrics of the Beatles album Revolver. As it was a rather metaphysical story, I decided to approach it in a rather metaphysical way, especially since I'd had major writer's block and needed some help however I could get it!

As mentioned in my last post, to get an initial, intuitive peek at my main characters, I conducted a tarot reading. Because...why not? I knew I wanted tarot to feature in the story somehow, so it felt appropriate to use it as an actual tool in crafting the story.

In my previous post, I shared the reading results for my protagonist, Ellie. Today I'm sharing another cursory character sketch using the same method. Once again, I used Ethony Dawn's Story Tarot Spread and the Tarot of Haunted House deck to learn a bit about my secondary character Beverley:

1. Significator: 5 of Pentacles. [Unlike the significator I deliberately chose for Ellie, I think I drew this card at random because I really didn't have a clear idea of this character.] She is destitute, working here to make what money she can, though has a true gift for spiritual connection and insight. Has to fend off a lot of creeps and skeptics, though, that threaten this livelihood.

2. Challenge: 9 of Wands (reversed).She's been through some hard knocks, but her defenses are down, and she's starting to fear this will never end--the way things have been--overwhelmed by what opportunities could be passing her by. What's her next step, and should she get a plane ticket out of town for a completely new start elsewhere?

3. Opportunity: The Moon (reversed). The Protagonist's challenge is the Psychic's opportunity. [See previous post, where the Moon reversed also showed up for my protagonist, Ellie.] This lost soul finds her and, together, they navigate the path(s) visible to them or not yet [visible].

4. Environment: The Magician. All sorts of tools available to them in the crystal shop! Crystals, tarot, other divination, and her psychic gifts. It's all there, just takes them to use it and manifest real change.

5. The Reward: The Emperor (reversed). Overthrowing the Patriarchy. She is vulnerable to men, too. [See previous post, where this issue also came up for Ellie.]

6. The Outcome: 4 of Swords (reversed)*. Getting up and out of her situation before it can snare her in its clutches for good. She's had enough time standing still and analyzing it to death. Time to rise and step out into the moonlight with our Protagonist, facing fears and following intuition together (?). Maybe she does leave town with the Protag. or just buys a ticket and leaves it to fate [at this point I had drawn a clarifying card, the Wheel of Fortune, which added that last bit of insight]. Goes to airport and sees where the next departures are headed. Standing up to men fires her up for positive change.

* To repeat my caption above, yes, the 4 of Swords was actually reversed. Ignore my shoddy work in re-creating the scene for the photo.

In my journal I then went on to look at the overall trends in the cards, particularly that out of six cards there were four Major Arcana and four reversals. I took this to mean: "This is a massive, ongoing issue for her with significant impact on her future. She's low energy and vulnerable, scared, and hesistant/resistant, though."

And I LOVE THIS: I next asked what the story's heat level should be, not sure how far I wanted to go with romance yet also not certain that a tarot card could give a clear answer on that...and then I drew this: 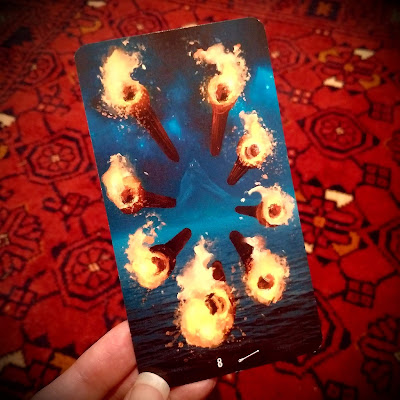 So, yeah. For the record, a tarot card can be very, very clear on that point. 😆

I wouldn't say I took the heat level that far in the story, but I did appreciate getting the go-ahead for some sexual tension if I wanted it! And as for Beverley, this exercise genuinely did help me begin to shape her in my mind, to get a sense of what her own conflict might be.

How closely did I follow this in the story? Read it and find out! 😃

"Revolve Her" is available in the Paperback Writers anthology at Amazon: http://getbook.at/PaperbackWriters 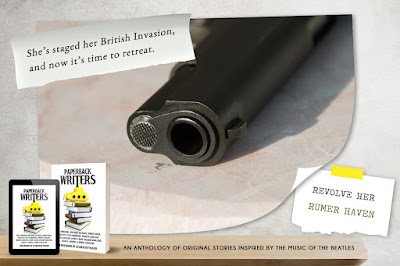