Howdy and happy weekend, all! As mentioned in my last post, I'm back now to talk a bit about the writing process for my latest project, "Revolve Her" (a short story that you can find in the Beatles-themed anthology Paperback Writers). I've taken to calling the process creative "woo"-riting, however, as this time, I not only wrote about the metaphysical, I practiced it as well to get the inspiration flowing.

In a previous post, I talked about how 2018 wasn't the most stellar year for my writing. For pretty much the entire year, I was blocked, so I seized it as an opportunity (if not took it as a sign) to step back and incubate in self-care and mystical study for a while. At the very least, all the stuff I've learned will make it into my future books! But it's all truly been transformational for me as a human being in general, and I think I needed to fill my cup in that respect before I could go back to being a writer, too.

In any case, to get to the point, when authors Morgan and Jennifer Locklear invited me to contribute a short story to the Paperback Writers anthology last year, I panicked that I wouldn't seize on an idea in time, given the absolute standstill of 2018. So, I felt I needed to get more serious about intention-setting and committing to follow-through. I began on the first evening of a new moon with a tarot spread, seeking advice on writing this story--and meeting its deadline. The oracle card I drew at the end of the reading as a final word (from the Sacred Rebels deck) was this: 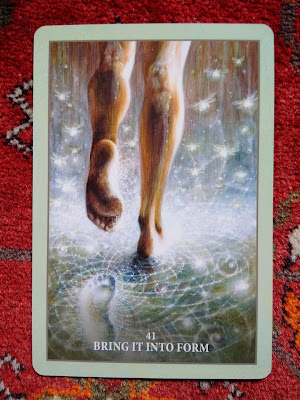 "Bring it into form." Uh, yep! Definitely the kick in the pants that I needed to get out of my writer's block and start manifesting ideas on the page again. By this point, my writing muscles were almost in atrophy, so just the image of this card was revitalizing and inspiring to see.

My next step was to conduct a new-moon ritual adapted (okay, totally ripped off) from Kelly Fitzgerald at The Truth in Story. The original video doesn't appear to be available anymore (or at least I can't find it), but, basically, she approached intention-setting using geomancy and the Wildwood Tarot. For this, she used a book box (which you can still get a glimpse at in this video: https://youtu.be/DXFbZtKH0WU), and I myself have ended up using a little wooden box with a hinged lid, like what you could store a tarot deck in. And whereas Kelly filled her box with normal sand, I found garnet sand from a Scottish seller on Etsy that is absolutely gorgeous and just the vibe I need. In the sand, you place stones in the shape of a geomancy figure that best expresses your intention. I take it a step further by using onyx rune stones that themselves represent the gist of what I'm after. In this case, the geomancy figure I chose was "The Way" (a straight line of four dots) to represent the path (and movement) forward, and the runes essentially reflected clarity, creativity, inspired communication, and a fruitful outcome. 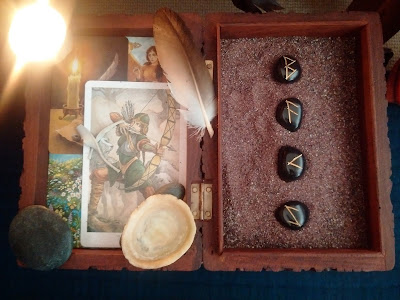 Next, at the four corners of the box lid on the left-hand side are representations of the elements--a tealight for fire, feather for air, stone for earth, and a small cup of water for, well, water (for my cup, I use a seashell that I collected on the Cornish coast along with the feather and stone). Between these elements, you can then lay one or more tarot or oracle cards that likewise embrace the spirit of your intention. Like Kelly, I've opted to use the Wildwood Tarot, which I supplement with the Celtic Lenormand deck to get even more specific about my intention. The cards I chose for this one were also concerned with forward momentum and hitting my writing target with creativity and skill.

I meditated on this intention for two moon cycles, I believe, and I wrote like I hadn't written in well over a year! The ideas came to me fast and furious, and I rediscovered my drive and joy. It's not so much that I cast a "spell" to make this happen; the process simply compelled me to get specific about my goal and to remain focused on it. Even when I wasn't meditating before this ritual box (repeating my precise intention over and over like a mantra), just a glance at it would remind me of what I needed to do, and every time I saw it, I felt the power of its motivation. I even took a photo of it for when I was writing on the road, just in case I needed to see it to believe in it again. To believe in myself again. And yeah, okay, I suppose I do also believe that in sending an intention out into the universe in this ritualistic, repeated way--and putting an earnest effort out there to back it up--the energy and inspiration I needed were sent right back to me.

I must say this was a very moving process, and I think the story that resulted--"Revolve Her"--is all the more unusual and special for it. So, it's no surprise that now that I need to re-edit What the Clocks Know, I just did this ritual again at the new moon yesterday. Same tools, different intention (ergo different cards, runes, and geomancy figure). 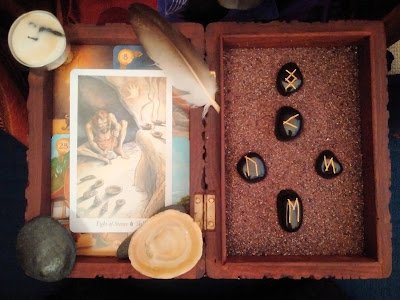 We'll see how the upcoming cycle plays out, but, in the meantime, I'll be back here with more creative woo-riting. Enjoy the weekend, my lovelies!