Madness to the Method, Part 2: The Outline 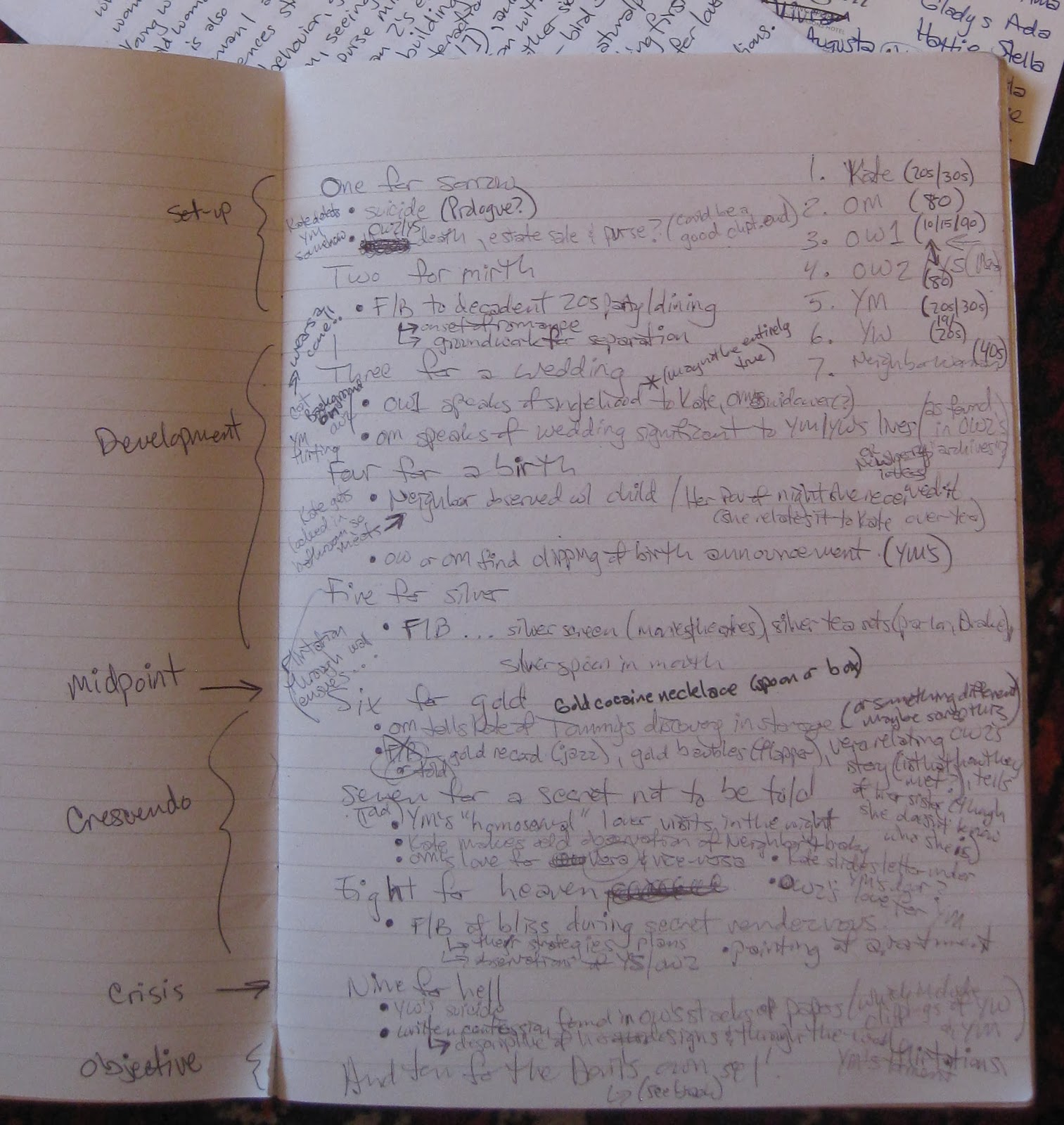 In my previous post, "Madness to the Method, Part 1: The Brainstorm," I discussed how all of my stories originate from a very sloppy, scattered place: my brain. And the only way to get them out of my head is to kick up a windstorm in there and blow the ideas out onto paper like so much debris. At some point, though, these ideas need to be swept up into a plot pile, which then gets tidied into a story arc.

I've written short stories and vignettes here and there ever since I was a kid, and in crafting those, I usually do just sit and write from start to finish, having a general idea of where I want to go but pretty much making it all up along the way. So when I first took a crack at writing a novel, I automatically assumed I could approach it the same way. Which, when I now think about it, was incredibly naive and insane. Writing a few hundred or thousand words is one thing (don't get me wrong, short stories also benefit from advance planning), but taking on several tens of thousands is quite another. It can become a management nightmare if you just run into such a vast and wild, unexplored frontier with all creative guns blazing and no strategic plan. So as I continued to revise my first manuscript, I had to learn the hard way that backing cohesion and proper pacing into a novel is difficult as hell, and it would have behooved me to have an outline first.

Which is what I did for my second manuscript. I gathered my miscellaneous brainstorming and started to slot it into sections. Still spastic scribblings in my journal, by no means neatly divided into tiers of A, B, C, i, ii, iii, but guidance nonetheless. This bullet-pointed bird's-eye view helped me tremendously by giving a sense of the story's shape and direction without also confining my creativity. I wasn't bound to every idea that I jotted down here, nor were any of them fleshed out enough to dictate every step of the journey. Some writers might prefer a more detailed outline than this, but I've found I personally thrive under this balance between the concrete and the as-yet abstract. The organized and the organic. That gives me the breathing room I need to let myself change my mind if the characters want to head somewhere else, and it allows for those moments of magic when, truly and almost inexplicably inspired, you just write without knowing where it's going and end up creating something better than you could've ever achieved if you'd thought about it too hard. 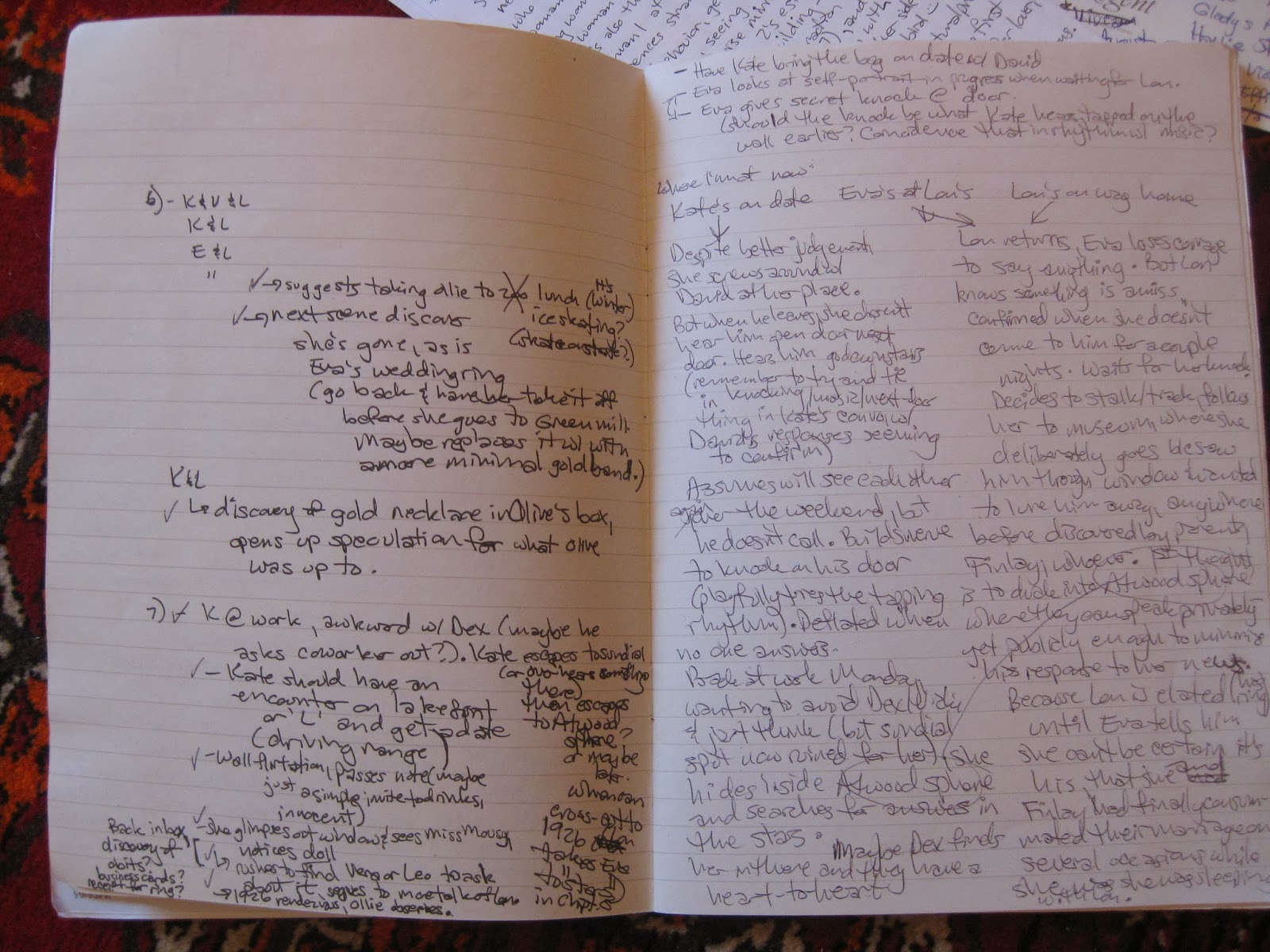 Giving myself over to the story this way inevitably demands script changes, then, and sometimes I still manage to write myself into a corner. I leave certain aspects open to possibility so reach the inevitable fork in the road where I must commit to one outcome versus another. And I don't always want to go with what I originally planned--or have written myself so far outside that scope that it isn't even an option anymore--at which point I'll sit with pen and paper yet again and hash it out. In the case of both Seven for a Secret and What the Clocks Know, I was closing in on the final chapters when I needed to stop, step back, and brainstorm my way through a State of the Story outline: basically, Here's where my characters are at right now. Is this where I want them to be, and, if so, what are their options from here? It became a decision tree of sorts that ultimately helped me work out the solutions (and bust through my writer's block).

Ultimately, every writer needs to find what method works best for him or her, and surely the process continues to evolve with experience. With only two novel manuscripts down, a third in the works, and a fourth largely in the brainstorm stage, I have personally learned that I will never again attempt one without some semblance of an outline and especially encourage the practice to anyone out there who is writing a novel for the first time.