Hello, hello, everyone! I'm back with another installment of my "Creative Woo-riting" series, specifically discussing how I used tarot to write my recent story "Revolve Her" (currently available in the Paperback Writers anthology by Locklear Books). In my previous posts, I shared how I used a tarot ritual and spread to prepare for the story. Today, I'll talk about how tarot factors directly into the plot.

So. I knew I wanted to write a scene about a tarot reading, but it felt too contrived if I were to hand-pick the cards myself. As the designer of the story, I obviously could've just selected the tarot cards with meanings coinciding with exactly what I wanted to convey. But where's the fun in that? If there's one thing I've learned about the tarot, it's that it's a lot wiser than me--even if it's only unearthing answers that I already know anyway! Sometimes we don't consciously know what is best, even if on some subconscious or unconscious level we do. So, I decided to leave this one to the cards and, honest to God, shuffled and drew a few at random, with the intention of unlocking the message my protagonist, Ellie, needed to hear.

This is what resulted: 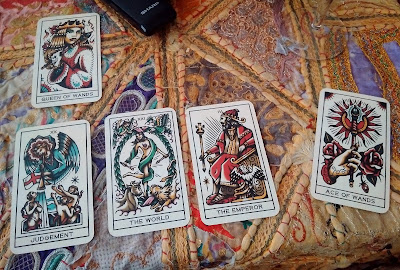 And here's how I interpreted and wrote it into "Revolve Her"...

Ellie’s been listening attentively up to this point—rapt, in fact—but the morning’s big breakfast and Bloody Mary are catching up with her. She yawns before she can help it.
Beverley stops mid-soliloquy. “Oh, I’m sorry. Am I boring you?” She only manages the straight face for so long, laughing robustly at her own act. Ellie is so enamored with the good-natured sound and smile that she reciprocates.
“Listen,” Beverley continues, “I don’t know who we’re talking about here, what’s happened between you two—like, really happened, not what’s in your head.” She’s no longer looking at Ellie but the space between them, her eyes appearing unfocused. “But you’ve got something there that isn’t over yet. I’m seeing unfinished business, heat that needs releasing to find closure. Someone needs to move on.”
“Someone?” Ellie asks. “As in me? I need to confront him and get over it?”
A sound catches in Beverley’s throat, and she swallows. Her eyes meet Ellie’s, slightly widened. If it weren’t so cliché—and truly creepy to contemplate—Ellie would think the psychic has just seen a ghost.
“You?” Beverley says at last. “No, no. You both.”
Her voice is as distant as her stare, but even in the candlelight, Ellie sees the light come back into her eyes. Beverley clears her throat.
“You and the—the guy,” she says, as if Ellie couldn’t already figure that out. “And even though you’re still seeking that completion, with him, what will help you find it is your current state of wholeness. You’re embodying who you are. You don’t need this man to be complete. But he’s a key factor somehow in a new cycle you’re starting. Maybe more conventional than expected, but not like what you’ve left. He offers a healthy stability, in which you’d continue to flourish. He wouldn’t—” She blinks her eyes, which have become glassy, and shakes her head. “He wouldn’t treat you as less-than. He only sees you for who you are, and…
“And I’m jealous as fuck.” Beverley chuckles toward her chest and wipes her eyes. “I’m sorry.” She looks up, her expression almost sad if it didn’t also look a little scared. “I don’t mean to monologue at you. That’s just what I see, in this moment, so why don’t you take it from here. Tell me what did or didn’t land with you.”
In all the time she’s been listening, Ellie would swear she stopped breathing if not for the shallow inhales of sage-spiced air that she’s felt caressing her nose. She feels light, dizzy but light, and morbidly relieved to hear Robert still spoken of in present tense. Yes, she needs to see him again. But for now, how much should she tell Beverley?
She decides to tell it all. At least, up to the part when she first discovered Robert was married, and then attempted to hightail it back to London via Phoenix. The coming-back-to-Sedona part was still a little fuzzy for her.

“Which brings me to this wretched morning,” she says, “when I woke with a thumping headache, empty stomach, new vegan holster”—she lifts her purse from where it hangs on her chair— “and a dash of wishful thinking, which must have brought on a psychic break indulging a sick fantasy I never actually had.”
“It wasn’t that.”
That’s all Beverley says.
“Well, all the same, I probably ought to consult a medical professional, don’t you think?”
“Wouldn’t help.”
“Why not?”
“Eleanor…”
“You can call me Ellie.”
“Ellie.” Beverley flashes her lovely pearl teeth before the misgiving reenters her lovely onyx eyes. Picking up the remaining pile of cards, she does another quick overhand shuffle before setting the deck down in front of Ellie and spreading it out, facedown, in a long line. “Mind drawing another one?”
“All right.” Scanning the fan of cards, Ellie instinctively zeroes in on one and pulls it out to present it to Beverley.
Ace of Wands, its caption reads. Ellie sees a disembodied hand holding a wand like her Queen of Wands. This wand projects so much more energy, though, as if channeling the very power of the sun’s rays. And though the tattooed hand that holds it seems feminine and similar to the Queen of Wands’, on some intuitive level, even Ellie knows it isn’t. It doesn’t belong to her—the queen or Ellie. Someone else is conducting this mad music, changing Ellie’s life with a wave of her hand.
Watching Beverley inspect the card for some time in silence, Ellie senses a big So, here’s the thing coming. She doesn’t know why, she doesn’t understand how, but true to expectations, Beverley finally opens her mouth to say, “I don’t know quite how to broach this delicately, so I’ll just come right out and say, well, suggest…”
Ellie tips her chin down into her neck, her raised brow encouraging Beverley to out with it.
“It’s just that, our time, for the tarot reading, is up. And I don’t care what you have and haven’t paid for, Ellie. If I had the time today, I would ask you to stay a while longer, free of charge. But since I don’t, and you might not anyway—” she pauses for an inhale, though she herself seems to loathe the unnecessary drama that adds “—Ellie, would you please consider scheduling another session with me? For a medium reading. Tomorrow. As soon as possible?”