*** THIS EVENT IS NOW CLOSED. ***
MANY CONGRATS, HOWEVER, TO OUR
GRAND-PRIZE WINNER,
CHRIS KEMP-PHILP!!!

As promised in my last post, welcome to the Historytellers Scavenger Hunt! This hunt is dedicated to novels historically set in the 1910s, 1920s and 1930s, across all genres. You’ll have the opportunity to discover new authors, new stories, and to meet other readers who love this time period--not to mention, you’ll be eligible to win the grand prize, which includes a digital copy of all the novels participating in the hunt!

This online event takes place only today, 17 March 2019, from 00:00 to 23:59 EST. You can find out how to play here: https://sarahzama.theoldshelter.com/historytellers-how-to-hunt/ 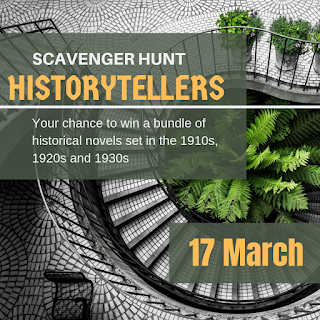 If you’d like to find out more about the hunt, see links to all the authors participating, and see the full list of prizes up for grabs, go to the Historytellers Scavenger Hunt page.

Directions: I’ve included my lucky number in this post (you will definitely spot it!). All my fellow authors participating in the hunt will also include a lucky number in their posts. Collect all of these numbers and add them up.

Entry Form: When you have that lucky total number, make sure you fill out the form below (or here) to officially qualify for the grand prize. Only entries with the correct number will qualify.

Rules: Anyone can take part. To be eligible for the grand prize, you must submit the completed entry form by 23:59 EST on Sunday, 17 March. Entries sent without the correct number or without contact information will not be considered. 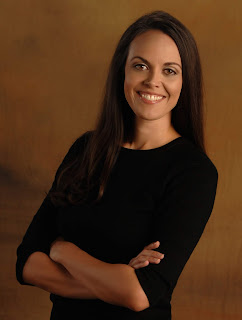 I'm probably the most social recluse you could ever meet. When not babbling my fool head off among friends and family, I'm pacified with a good story that I'm reading, writing, or revising--or binge-watching Buffy. Hailing from Chicago, I presently live in London with my husband and probably a ghost or two. I've always had a penchant for the past and paranormal, which inspires my writing to explore dimensions of time, love, and the soul. My award-winning work includes Coattails and Cocktails (First Prize Winner, 2018 Red City Review Book Awards) and What the Clocks Know (First Place Winner in General Fiction, 2017 Red City Review Book Awards).

Coming up next is the novel up for grabs in the HISTORYTELLERS Scavenger Hunt Grand Prize!

***TODAY'S PRIZE FROM YOURS TRULY***
(COATTAILS AND COCKTAILS) 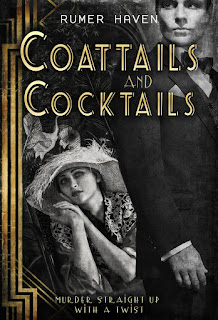 A body clearly shaken, but not stirring...

Summer, 1929. Murder isn't on the menu when Chicago tycoon Ransom Warne hosts a dinner party at his country estate. But someone's a victim--and everyone's a suspect--when drinks and desires lead to disaster.

Hollywood starlet Lottie Landry has returned home to celebrate her engagement. She's famous for her on- and off-screen romance with co-star Noble, but, privately, she's having second thoughts. As her former guardian, Ransom doesn't approve of the match. Yet his own affections raise questions when his wife, Edith, suspects him of having an affair--just as Noble suspects Lottie. Stirred into the mix are Lottie's friends Helen and Rex, a young journalist and football hero who can feel tension building in the Warne mansion like a shaken champagne bottle.

And once the cork pops, a body drops.

Coattails and Cocktails is where Agatha Christie meets The Great Gatsby, a whodunit spiked with new love and old baggage, public faces and private vices. Filled to the brim with romance and mystery, it's sure to intoxicate.

Available in both ebook and paperback format at AMAZON: getbook.at/CAC

While Coattails and Cocktails is 100% historical fiction, my next book will be set in modern day but with some flashbacks to a past era. Unfortunately, I haven't drafted those bits yet, but what I can offer today is a draft scene set at a murder-mystery dinner, in which my contemporary characters role play as 1940s murder suspects.

So, to be clear, this is not an excerpt from Coattails and Cocktails, the historical murder mystery featured above as my contribution to today's Grand Prize--which also happens to be accessible to anyone at any time at Amazon. No, ma'ams and sirs, what follows below is from a story I am still slowly but surely writing about a modern-day mystery dinner game--and no one's eyes but mine have read this yet!

And so, without further ado... (Though please do bear in mind this is a first draft and highly subject to change, if it ends up making the final cut at all! 'Tis the beauty of the writing process. :))

[ROUGH-DRAFT EXCERPT FROM MY CURRENT PROJECT]

“Ladies and gentlemen,” Aubrey began after everyone quickly reacquainted or introduced themselves—their real selves, not their characters—“it is my master’s greatest privilege to welcome you into his home.”


And now the moment you've been waiting for... My lucky number is 16! Add it up with all the other lucky numbers and you’ll have the secret code to enter for the Grand Prize!

To keep going on your quest, you need to check out the next author, Lillian Csernica! https://lillian888.wordpress.com/ 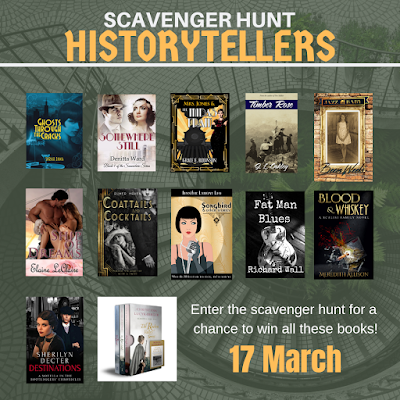