'Tis been a long while (yet again), but, rest assured, there's been some writing for my next manuscript as well as more of the woo I mentioned last time. Interestingly, the latter has helped as I try to work through my writer's block--tarot in particular. As author Maggie Stiefvater says in the introduction to her tarot guidebook, Illuminating the Prophecy:

I love them in all forms: in writing, in art, in music. [...] My favorite sorts of stories, however, are the ones that people tell about themselves.

It's so true. And I'm finding my way back into storytelling through the cards.

I've been studying tarot a lot lately, rekindling my interest after receiving my first deck several years ago. Since then, I've accumulated other decks to compare/contrast their symbolism and aesthetic, gauge how my intuition might work with each differently. And now as summer slowly fades into fall, I've been keen to work with decks that capture an autumn atmosphere. While not technically a seasonal deck, my newest one seems to deliver just that: The Raven's Prophecy.

(The glare in the photo doesn't properly show it, but, despite not being a Halloween-themed deck, these cards have pumpkin-orange borders and deep black backgrounds.) 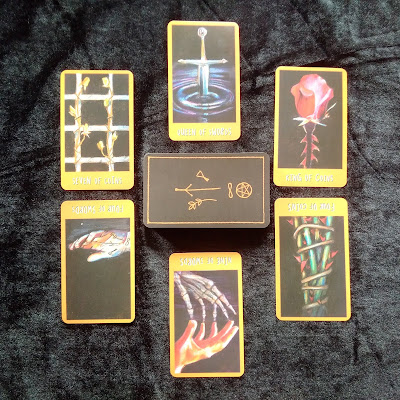 Created by Maggie Stiefvater, The Raven's Prophecy was inspired by her Raven Cycle young adult book series. I discovered these cards before the novels, so I'm eagerly reading The Raven Boys now! So far, it's ticking all the boxes of paranormal intrigue that I adore.

At any rate, whenever I get a new deck, I interview it to get to know it better and understand how we might work best together. It's a very fun little exercise, and this deck straight away blew me away!

First of all, I've been drawing a card a day from my traditional Rider-Waite-Smith tarot and sharing my personal reflections over at my original creative writing blog (you know, before I became such a diva and demanded a separate author site 😉). Well, today's card was the Queen of Wands, which fell face-up in my lap while I was shuffling. So this morning I blogged about what a passionate, creative, energetic spirit this queen is, and then this afternoon decided to interview my Raven tarot after its delivery.

Right out of the gate, the Queen of Wands of that deck shot out of the pile. I mean, shot straight ahead with such force it almost startled me. She sure is a spitfire! And the longer I subsequently meditated on my tarot spread, the more apparent it became that the card-a-day I'd initially assumed was about me was actually heralding the arrival of this deck. A prophecy of the Raven's Prophecy, if you will. The deck is the freakin' Queen of Wands around here!

Second of all, as I do read reversed cards, I left it as is when the entire top row of my spread was dealt upright and the entire bottom row was upside down. Automatically, I viewed this as a mirror reflection, the bottom reflecting the top. And just as I had this thought, I noticed the reflection pictured in the card closest to me (bottom-center in the photo above). Had I turned this card right-side up, then I may have lost the impact of seeing that hand reaching from where I was sitting to touch the bony fingertips of the skeletal hand reaching out to me from the deck--as if reaching to me from the other side, from a higher consciousness that knows the answers I seek, the ones already within me that I just have to recognize. Maybe you had to be there, but this shivered me timbers for sure. Awesome!

Okay, so, moving on. Below is how my interview with this hot thang transpired (see above photo of the "Interview Spread" that I learned from Little Red Tarot):

1. Tell me about yourself. What is your most important characteristic? Seven of Coins. I generally interpret this as patiently waiting to reap the fruits of one's labors, so I think this deck is telling me there will be no easy, quick fixes. Its advice will require time and effort on my part, but I'll ultimately be rewarded for it.

2. What are your strengths as a deck? Queen of Swords. This one cuts straight to the truth. Its guidance will be honest but fair, what I need to hear even if I don't want to.

3. What are your limits? King of Coins. Seems this deck will be down to earth but perhaps prickly and stern in its authority. Like the Queen of Swords, this King can draw blood with those thorns.

4. What are you here to teach me? Four of Swords (reversed). This could be a call for me to stop and rest to take stock of situations before I act on them, but given its reversal and the context of the spread, I think this deck is poking at me to get up and at 'em. Telling me that I tend to stall and take plenty of time to think, but that it's time to take action. To not take life lying down and instead be proactive toward my goals.

5. How can I best learn and collaborate with you? Nine of Swords (reversed). I need to get over my irrational fears and face the music this deck plays for me. As mentioned before, it may tell me things I don't want to hear, but it's in my best interest. I need to meet the deck halfway, not fearing what it has to say but trusting it and acting on it.

6. What is the potential outcome of our working relationship? Four of Coins (reversed). I feel like this one echoes its pals in urging me out of my comfort zone, encouraging me to not hold things so close to the chest and branch out. Perhaps in helping myself, I can help others.

This is just a cursory interpretation, but needless to say, methinks this deck is going to be a little ball-buster! Yet in the best of ways. My only reason for practicing tarot is to hold a mirror to myself to help me see what I've otherwise been unable to (*ahem* Mirror, I say? Like the mirror image I commented on above? You bet I read something into that!). So I think this is the beginning of a beautiful friendship between the Raven and R.Haven. May we both have many stories to tell!
Posted by Rumer Haven at 9:37 PM