It All Started with a Purse 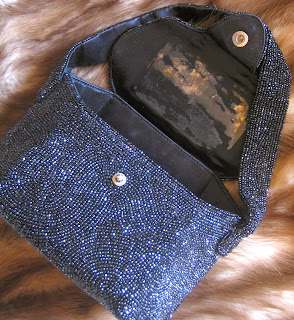 Whenever I'm asked for advice on how to get started writing a novel, my response is pretty simple: "Start writing." The only way to do it is to, you know, actually do it. You can't sculpt anything without the clay. There is no novel to polish and perfect without the first draft. A really rough, rambling, rookie first draft. That's what you cut your teeth on.

Easier said than done, perhaps, when you don't have any idea what you want to write about. My answer is still the same: Write. Write about everything; write about nothing. Writing a novel isn't about facing a blank computer screen and starting at Chapter One, Page One. Before there's a first draft, there should be an outline. But even before the outline, there are usually chicken scratchings jotted down on any surface you can get your hands on: notebook paper, a journal, an envelope, a napkin... You need to brainstorm ideas and simply stretch and flex your creative muscles by writing about anything whatsoever. Writing prompts work for me when I find myself in a rut, whether from an actual book of them or based on a random thought I might have while out walking or in the shower. Watch people and things; observe behavior and sensory detail. And when you write something down about it, don't put the pressure on yourself to make it perfect. That all comes in due time. For now, just let go.

Reflecting on my own path to publication, I'd like to look way, way back--before I ever attempted writing a novel, before I was remotely close to having an idea for the first manuscript I wrote, let alone the second one that was actually my first to get published ("debut" novels are so rarely the first that a person writes!). As you might have seen in my website's Thrift Shop, there's a little black purse that I purchased several years ago at a vintage sale. I was busy full-time teaching back then; my time was too filled with lesson-planning and grading and barely grasping my sanity to even fathom carving out more for writing novel-length fiction. But I liked to dapple in short stories and vignettes, just to give my imagination somewhere to wander aimlessly. And for whatever reason, that little black beaded bag sparked my fancies enough for me to sit and dash off this freewriting:

She heard the drain from above release from some lucky gal’s late-night bath. Flipping through the pages, she paused for a moment’s thought, and her eyes unconsciously drifted to the evening bag still setting on the floor where she had left it several nights prior, nesting in the original brown bag of its purchase. She found even when she became conscious of the object of her line of sight and was plucked from her pensive pause, as her eyes focused they still did not seem to do so...enrapt were they in the celestial body of the beading, as though staring into the milky heavens, a private observatory of unrestricted skies, free of constellation form and twinkling the more for it. With a zoom-in motion, her eyes and mind were lured, and it was only then that she became aware of the increasing volume and intensity of the water trickling through the piping above, though it did not seem of the direction of the general vicinity of the bathroom, but encompassing her, about her, around her, within her, deafening her, the drops streaming then beading on her skin, the blood trickling through her veins with a new coolness. The zoom-in was no longer a stationary movement as she found she had risen from the sofa and approached the dazzling hexagon, swept open its glittering lid and stared into the reflective remnants of the former mirror’s backing, seeking out that which sought, until, in a flicker irretrievable, she saw them. A pair of fogged green eyes glaring back.

I didn't worry about grammar or if what I was saying even made sense; I just wrote without stopping. And now six to seven years later, an adapted version of this rough sketch appears in the third chapter of Seven for a Secret--not because I was feeling unoriginal and wanted to lamely rehash whatever I'd already written, but because that very last sentence (that spewed out off the top of my head without thinking about it very hard) ultimately gave me the idea for this book.

Just goes to show how those random observations are worth the time you give them. And those scraps of paper you scribble on are worth holding on to as pieces of an as-yet unknown puzzle. You never know if or when their time will come to develop into something much more. So what miscellaneous little whimsy might you pen some words about in the next few minutes? On your mark...get set...GO WRITE!
Posted by Rumer Haven at 6:00 PM